A gymnasium strewn with upturned tables for barricades, a child-hearted husband and wife instigators of the fracas. Boys with single-shot pistols, automatics, rifles, rocket launchers, gathering to compare armaments. The older ones show the younger how to modify their weapons for greater velocity and range. Foam rounds fall from their pockets and collect around their tennis shoes. They sort teams according to colored bandanas. They gather to opposite ends of the battlefield. They raise flags.

Shooting begins. We adults on bleachers now, boys darting past, plastic and rubber and suction-cup tipped foam rounds zipping through the air, shouts and laughter filling up the place.

Eli and Isaac are smaller than most here. They move about as a pair, hiding behind tables, heads together in conference, signaling one another with their hands, sniping older boys from between the slats. They develop a method of creeping behind their enemies, surreptitious kill shots to the back.

Caleb is focused more on his weapon than his enemies; it doesn’t work perfectly. Nearly every time he will be shot tonight, it will be because he is tinkering or talking to someone.

Isaiah climbs down from the bleachers and wanders into the middle of the fray, collecting spent rounds. Foam darts whiz over top his head. He brings back a handful, grinning and laughing.

A flag is captured. Shouts of joy and misery. They switch sides. Shooting resumes. Some boys are kamikazes, charging into the enemy base to be peppered by darts and sent home. Others creep along the walls. I have a spare gun; I shoot some for good measure. They don’t know where the darts are coming from.

Eli advances to mid-court, in the open, dealing darts at his backpedaling enemies. He stops and begins reloading without taking cover. He’s under the impression the rules forbid shooting someone when he is reloading. His enemies are under the impression that this is precisely the time to shoot someone. Eli goes down, protesting, in a hail of hard foam.

An older boys advances now, four-foot rocket launcher on his shoulder. Smaller boys retreat, eyes wide. He takes aim at a slower-moving target, pulls the trigger. The cumbersome rocket fizzles from the end of the launcher, more impressive as threat than actuality. The smaller boys gun down the fleeing rocket toter with a fury.

Isaac runs to me, his gun jammed. I hand him my spare. He re-enters the fray. He finds himself pinned behind a table at mid-court, enemies on both flanks. He directs slow, steady fire from behind table slats. I fix his gun. A little girl, Isaac’s friend, snatches it from my hand and rushes out into the dart storm to give the boy back his preferred weapon. He takes it from her nonchalantly, his face gravely surveying the danger around them. She skips back to the bleachers. He calmly deals out Nerf death to his enemies.

A pause for snacks. It’s time for night-fighting. Older boys help younger ones tape flashlights to the muzzles of their weapons. Darkness, shouts of young animal joy, creeping figures, light beams wildly cutting the gloom, the click-whiz of rounds being released. From across the gym comes the ack-ack-ack of a Nerf machine gun. Who knew they made such a thing? Shadows trudge back to their home base, cut down en masse in the darkness.

It ends, as all wars do, except that after this one everyone goes home to bed. They are wild-eyed and happy and still friends, boy hearts thumping madly with dreams of courage and without, thankfully for now, knowledge of fear. This could be a cure for many adult sadnesses, to see children at play, to remember the carefree feeling, to be reminded that we are watched over more carefully, and loved more fiercely, than even they. 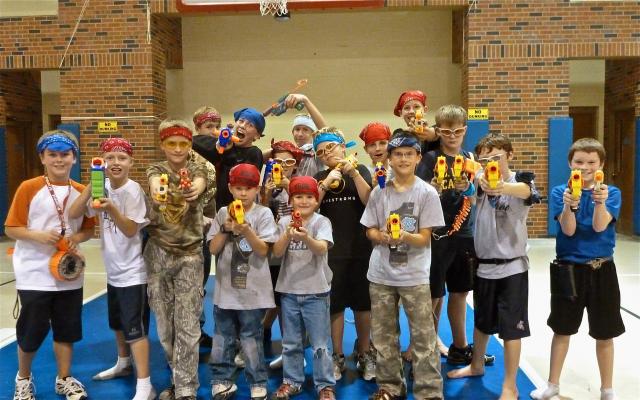