On the giving of thanks, stomach viruses, and giant Christmas ornaments

My friend Johnny Utah, newly paroled, spent Thanksgiving with us. In order to make up for my various inadequacies over the course of this past year, I decided to roll several manly stereotypes into one — a testosterone turducken, if you will — by driving my pickup across the creek and up a steep rise into a field, where we set up my clay thrower and went about obliterating orange disks with a panoply of shotguns.

I’m proud to report that ten year-old Caleb, in his very first attempt to shoot a clay, blasted one to millions of tiny little bits. He used a 28-gauge, no less, which takes a lot more accuracy than the 12-gauge street-sweeper I was toting. I’ve heard people say they’d rather be lucky than good, but I believe ample semi-automatic firepower is a reasonable substitute for luck and goodness, in a pinch. 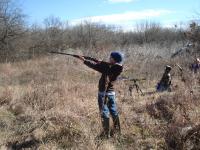 I didn’t fry a turkey this year. I felt that was best, since I have recovered from the trauma of last year’s attempt, when inadequate oil led to a turkey that looked like someone who’d sat too long in a tanning booth with his pasty white legs hanging out the end of it. I didn’t fry a turkey, and I never got rid of last year’s oil, either, and apparently that stuff gets really carcinogenic, which means now I’ve got a vat of toxic waste I need to dispose of. I wonder if year-old turkey-infused peanut oil lights very easily. Maybe I can pour it out in the field and let Caleb shoot at it.

Even with a regular turkey, the meal was just dandy. Isaiah didn’t eat any, having chosen this time to come down with the rotovirus that everyone else in the house had the good sense to contract last week. If you don’t know what the rotovirus is, just imagine that your guts are a theater. Now imagine someone shouting “Fire!”

So instead of eating, Isaiah just sat in my lap and looked at the squash casserole and whimpered. We finally gave him Motrin, and then he perked up almost immediately, demanded a cookie, and proceeded to speak ALL THE WORDS he’d been storing up during his illness. Isaiah has this habit, when he’s talking to you, of putting his hand on your cheek and redirecting your face to his own. So he knows you’re listening. I tried not to think about the germs.

And now it’s today, which is the day when we put up the Christmas tree. It’s also the day when I waltz outside and plug in the cord to the gigantic lighted bulbs I made last year out of hanging baskets and Christmas lights, and strung from the first tree you would see if you pulled into our drive, if you had any idea on what remote back country road we live, which you don’t.

I can walk outside and simply plug in the cord because I didn’t take down those bulbs from last Christmas. Annoying for most of the year, yes, but today it makes me look like a well-prepared genius.