On the passing of Sheriff Andy 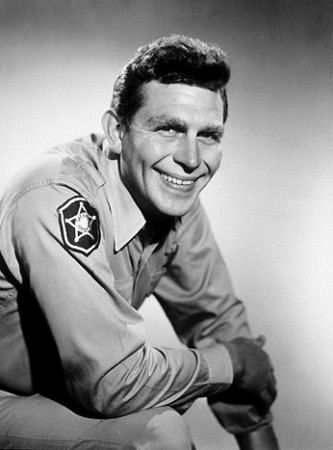 My first miserable year in graduate school I got a used television and paid for cable so I could watch four episodes of The Andy Griffith Show a day. My apartment mate, a math whiz with perfect board scores from Harvard, would come through the door and ask how Aunt Bee and Opie and everyone back home were getting along.

Within a month he was addicted. I would drink my skunky Molsen beer and he would eat Wheaties from an old plastic ice cream tub and we would watch Sheriff Andy set things to rights, and though I never was all that fond of Ted Turner, I think it’s fair to say that he as much as anyone helped me get a Ph.D., because I hated Michigan and I didn’t want to be there and those four doses of Andy Griffith a day saw me through.

I loved that show when I was a boy, and I’ve seen every episode — at least the ones until Don Knotts went on his way — at least a dozen times, likely more. It wasn’t that he was from my home state, or that these were the only genuine southern accents on television. It was simply the fact that Sheriff Andy protected everyone and never hurt anyone. I probably wasn’t the only boy who wished he was my father, just like thousands of us wished we could live with Pa in that little house on the prairie.

The man left behind a mixed body of work, as we all do. His early comedic routines were, much like those of Bill Cosby, pathbreaking even as they were rooted in the traditions from which they sprang. He had a lovely voice and was a keen musician — something that ought to amaze anyone familiar with the inscrutable hymns of the Moravian Church in which he almost became a preacher.

His performance in Elia Kazan’s A Face in the Crowd ought to be studied by those who question why the American Founders erected several layers of defense against demagogues. His work on The Andy Griffith Show — ably assisted by Don Knotts, his No Time for Sergeants comic foil who was rightly the clown in his television show — was far more deeply humorous than almost anything on the air.

I never enjoyed Matlock, though it lasted, perhaps surprisingly, longer than The Andy Griffith Show. Anyone who thinks he lost a step or two, however, should pay attention to his cameo performance in the lovely movie Waitress. Though he didn’t always get the chance to flex those muscles, the man had presence and timing, which is a far sight more than half the pretty boys and girls stumbling across the stage these days.

He had the predictable small-town politics of a country boy who made good. He shilled on occasion for visionless local hacks. He joined with Ron Howard to help sell Obamacare, ticking off the promises of its purveyors to his audience as if the rest of us opposed it because we don’t want people to see doctors when they’re sick. But his heart was in the right place, and he didn’t know any better, and God willing people can say the same about at least a few of my mistakes one day.

Maybe in the end all any of us can hope is that when we are gone, the world is both richer for our having been here, and poorer for our passing. That’s certainly true of Andrew Samuel Griffith, at least so far as this North Carolina boy is concerned. Rest in peace, Sheriff Andy.