In defense of The Hobbit 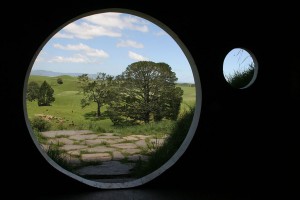 Look, it’s not like The Hobbit is Holy Scripture. It’s not even, last I checked, part of the Apocrypha. It seems to me that the standard for judging Peter Jackson’s film rendition, then, ought to be whether it succeeds as art, rather than its faithfulness to Tolkien’s book.

If we view the film as an action flick, in other words, it’s not half bad. Yes, Jackson’s desire to S-T-R-E-T-C-H the story across three segments, thereby extracting triple the ticket revenue, leads to irritating delays. I’ve fed my four children, given them dessert, cleaned the kitchen, bathed the little ones, shouted and cajoled them all into bed, and had my evening Scotch faster than the dwarves take to finish their meal at Bilbo’s. But this is annoying precisely because there’s no action. Once the swords start swinging, the movie is more fun, and far more profound, than most action fare these days.

But there’s no white orc in The Hobbit! The trolls are all wrong! That’s not the Goblin King’s rightful personality!

Yes, and in Jaws the shark expert has an affair with Chief Brody’s wife, in Dracula the vampire is a horror rather than a hunk, and in The Bourne Identity every action sentence is an embarrassing cliché. Movies often differ from the books that inspire them. We don’t normally complain, we simply ask whether the story works within its medium. (Answer: Benchley and Spielberg render Jaws masterfully, Coppola’s Dracula is abhorrent, and illiteracy is preferable to reading Ludlum.)

Not so with Tolkien, however. I don’t know if it’s because he’s been adopted as patron saint of the latest, seemingly interminable war against anti-Semitic fascism, or inducted into the unofficial Christian canon, but folks seem inclined to view his work as unalterable. If Martin Luther had been held to the same standard, the Protestants would be reading a different Bible right now.

In short, if you want your children to imbibe the aesthetic feel of Tolkien and embrace his theology of mystery and grace, then read Tolkien to them, for crying out loud. If you want to watch a bunch of orcs get their heads handed to them, on the other hand, then go see the movie. There’s no need to constrain one with the other.