In the gathered dark freezing rain scaled the limbs, the leaves, and every outstretched thing. We woke to the thrum of a power line fallen, its light so savage we had to shield our eyes. Electric fire inhabited a tree despite the battering sleet. Its branches burned amidst a world gone to ice and it was an awful, holy thing.

Power spilled from the severed line until someone threw a switch. What sound remained was the sleet like a campfire skillet. It sapphired the dawning landscape, and trees bowed beneath it.

The first thunder came an hour later, only it was not thunder, it was the crack of a limb tearing loose, a long and remorseless crepitation that was followed by silence, then a thump. Some minutes later was another crack, another thump. All day long the sky fell. 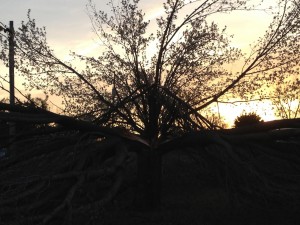 There is no predicting which trees will break, nor how they will falter. Some shed limbs as a rebirthing, others lose not a one. Some are sundered to their roots, as if a rotten core had crept up through the center of them, or had been birthed within them, had been inside them from the beginning, only to be revealed in the testing hour.

A pin oak behind my house cast down a dozen widow-makers, a proud magnolia fell into itself grotesquely. A pear tree shed half itself across my driveway. Branches speared the earth, some of them a foot deep, because when you stretch to heaven you have much further to fall, and your breaking is perilous to all around you.

There is no telling which will crack and which can bear the weight, and this is true of you, and me, and perhaps even some we hold invincible.

Sometimes the ones we thought strong topple, while the stoop-shouldered endure. They endure because they bend beneath the weight, they shoulder it as beasts of burden and within them is something like faith that it will pass.

And it does pass, and we give thanks for the maiming, for the shedding of our weakness that could not bear the weight, the proud or sickened parts of ourselves that might have spread to the roots if not for the awful and merciful storm.