Most of us have never endured war amidst our homes and so we can only imagine, if we care to, the terror that drives people to take their children and elderly parents and spouses and flee all they have known. Now they gather on the shores of the West, but they look like the lunatics who yearn to bathe themselves in our blood, so many of us, our own children and parents and spouses in mind, insist there is no room at the inn.

Yes, we’ve seen that baby Syrian boy washed up on a Turkish beach, his little shoes knocking together in the merciless wake, but we’ve also seen the shootings in Paris, a soldier hacked to pieces on a London sidewalk, a filmmaker butchered on his morning commute in Amsterdam, and we say: Not here. Not us.

Fear makes us ugly. Is that what makes the butchers so cruel? Fear of us, or the light of truth, or maybe just their own bloodthirsty little god?

So here we stand, on one side of the gates, and on the other wait women and children and yes, men. Perhaps every mother’s son of them is a shoemaker or a goatherd, but to us they are glowering, heathenish, each possessing the wicked skill to fashion a bomb or separate a head from its neck. We fear them because we don’t know them, and what’s more, we fear them because we are governed by a president willing to trade Taliban prisoners for a U.S. Army deserter even as he allowed an American Marine to languish in a Mexican prison, because our federal bureaucracy acts as if Amish raw-milk farmers are a graver threat to America than combatants in Guantanamo, because TSA agents excel at confiscating make-up while missing explosives. 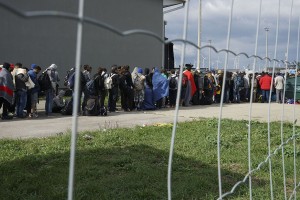 Whatever irrational fears animate us to resist Syrian immigrants, to these must be added a reasonable distrust of our own government. Yet even the most competent of administrations would be unable to guarantee every war refugee crossing our border didn’t harbor an intention to slaughter us in our beds.

The shame of it is that many of us could police our communities well enough, if left to our own devices and traditions. I’ve lived in two small towns over the past ten years, neither, fortunately, beset by the combination of joblessness, welfare dependency, and drug addiction sweeping rural America. People here assume you have a job, that you go to church, that you have kids and you know where they are at night. We’re hopelessly backward and many of us aren’t all that well-read and some of us are probably even a little proud of that. We’re shockingly — in many cases quite illegally — armed. Our children grow up to be the youngsters politicians send to war. We know our neighbors. We notice strangers. Being in the country, we know what bullshit smells like, and, not living in the city, we have little taste for it.

Many of us know what it’s like to be dead-broke, and probably every blessed one of us has sat through — if not participated in — a Christmas play in a little brick church, so we all know the story of Mary and Joseph and the manger. What I mean is that many of us have a heart for the poor, and for the people who don’t fit into polite society. We give our neighbors jobs when they’re out of work. We invite our country-ass redneck relatives to the Fourth of July picnic even though we know they’ll embarrass us.

The point is, many of us would be willing to accept some refugees into our communities. We’d give you work if we had it, we’d bring your children into our schools, we’d feed you at our Wednesday-night church chicken suppers.

Just remember that we’re backward and simple-minded and violent. If we see a cluster of you meeting in a basement night after night, expect the local cops and a few deputized citizens to drop in unannounced. Looking to buy ammonium nitrate? If no farmer around here will vouch for you, you’re in for some unpleasant questioning.

Constitutional rights? Those are for citizens. You’re still a guest, and we’ll evict you when we like, on terms as rough as you want to make them.

And just so you’re prepared, don’t expect to catch any of us bobbing our heads when John Kerry says Islam is a religion of peace. That doesn’t mean we’ll stop you from building a little mosque, but if you’re not stringing up a black shroud and an American flag every time some nut murders innocents with your god’s name on his lips, you’d best have fire insurance. And if we catch you passing out al-Qaeda tracts, expect an ax handle to the head. Try to indoctrinate any of our kids, and you’ll likely go missing for good. There are a lot of fields and hollows out here.

It’s cruel-minded and unenlighted, but probably a far better deal than refugees can expect elsewhere. And I suspect a good many of them would urge us to take our intolerance a step further. They know, after all, what real barbarity is, and the price of being soft in the face of it. They’re exactly the kind of neighbors, by the way, we’d like to have. Who in a generation or two could be more solidly American, in our eyes, than anyone raised in Manhattan or San Francisco.

But none of this is acceptable in the modern, civilized, rights-strewn, sensitive American landscape. We prefer the devil’s choice: either admit refugees under the administration of our vast, unwieldy, unaccountable federal bureaucracy, or leave them to the wolves. There’s no room, in other words, for common sense, for country wisdom, for community control and its accompanying compassion, which runs deeper than you might expect, were you to confine your understanding of average Americans to what you read in Salon. And this explains more problems than just the current refugee crisis — a crisis, like so many others, that our own short-sighted, inept interventions fostered, and which, like the others which bedevil us, we’ll forget as soon as we can.