The Cost of Calling: The Answer

I come now to the question in my heart when I began: what can my sons say to a deceived and soul-sickened world?

You might remember the story of a girl murdered that awful day in Columbine. As this story goes, one of the demoniac boys asked if she believed in God, and when she answered yes, he shotgunned her face. This inspired a song and a book, and was disputed by some who didn’t hear her say what others say they heard. The facts are disputed, but even the energy poured into disputing them points to the power of a word.

What words shall our children carry into this world? I ask because, whether they are called to be plumbers or priests, we want our children to be true. That doesn’t mean they need voice every truth, for if we’ve learned anything from the failures of modern Christianity, it is that talk is not only cheap, it cheapens. Be ye doers of the word, and not hearers only. Ever notice that the more someone does, the less time he has to tell others what to do, and the more power his scarce words carry? That. God knows, we need more of that. 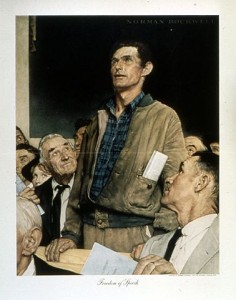 Yet words are sometimes needed. What shall they be? Shall they be what the world wants to hear? God forbid. The world is poisoned by its sweet-talkers. It despises its candymen, yet it fears the emptiness should it send them away.

Then shall the words be what the world hates? Bile seems but a different kind of venom than sugar, and just as self-seeking. To deliberately seek the world’s love or its hate is to make it a mirror for the purposes of admiring oneself.

Then what should they say? Of course we should no more determine what words our children will voice, when they come into their own, than we should determine for them where on the plumber-priest continuum they settle. But if we are training and leading and praying them toward trueness, toward being the people I tried to describe in my first missive, then surely we are preparing them to speak when others are silent.

But when? But what?

God only knows, and I suppose that is the fear and the comfort. Perhaps neither your children nor mine will be called to speak against the evils we are increasingly expected to call good. To live against them, yes, which is an altogether different matter, but generally a safer one. Maybe they will be spared, however, the cost that comes due when one calls a cherished evil by its rightful name.

The danger in being called is that you must answer. You must answer with your life, as Viktor Frankl wrote, and sometimes, as Isaiah reminds us, with your voice. The alternative is to sit quietly on your couch and turn up the volume of your television until you can no longer hear the calling. I don’t know if hell is flames or if hell is ice but I’ll wager its sting feels something like those moments when we glimpse what might have been, had we been braver, had we been truer, had we answered a calling. Preparing our children for calling is, in a very real sense, preparing them to sidestep hell.

These sons of mine are growing so fast toward manhood that I can scarcely keep ahead in my desperate effort to reach it before them. I can’t tell them what to say, but I can tell them that this is a broken and heart-sick world, which means it is a world craving redemption. What may be said, to help hasten that redemption? Find those words, child, and say them with your voice and with your heart and with your hands.

No matter the cost.