A note about the end

I used to write much more about my children, but they’re growing despite my best efforts to conserve groceries, and they’re online in their various ways, and so it makes sense to let them tell their own stories, in their own time, in their own ways. I mean I know there are writers who tell you everything there is to reveal about their families, stuff their priests and psychologists don’t even know until it comes out in hardcover, and there was a time when I was one of these. I even wrote a book which some of you read, and we all know how that turned out.1

The point is, my children are still really interesting and wonderful even though I don’t write much about them any more, and I still love them every bit as much and fall in love with them all over again every day, though I should admit there are times when I want to strangle them, and I wonder whether I’m their real father every time they show any athletic prowess or talk during a movie.2 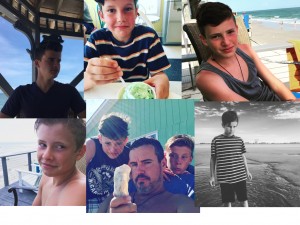 And because tomorrow is the anniversary of my mother’s death I find myself thinking about her foibles and the many ways I tried to distance myself from her3 and how at the same time I miss her quirks that made me grind my teeth, and I sort of transpose all that onto my relationship with my own children, and wonder what mixture of relief and grieving will attend in their hearts my passing, and what they will come to miss even though in this present day it incites eye-rolling. I’m not talking here about the major heavy things, the clouds over your life’s landscape which shade everything but rarely in themselves become the subject of conversation;4 I’m thinking instead of the idiosyncrasies, the little oddities that make me Dad to them.5

The thing is at some point you stop being this omniscient omnipotent benevolent life-bestower to your kids and you become a person, you know? And it’s a frightening, wizard-of-Oz-having-the-curtain-yanked-away kind of feeling, but also enriching, I guess is the best word for it, because instead of carrying them now you walk alongside them, and sure they still lean on you and they look to you to make decisions about the route even if they think you’re an idiot and if they have every intention of going left as soon as you say right, but even now you can feel their muscles growing, and hear their thoughts quickening and becoming their own thoughts, not just extensions of yours, and you know they’re preparing to strike out on their own paths, and you’re excited for them and terrified, and you lie awake more nights than you probably want to admit because Jesus is this sleeplessness even normal and what if there’s something wrong with you, and the truth of it is you just don’t have time for anything to be wrong with you, so you quietly lie awake more nights than you’ll tell your priest or your shrink and you grapple in your remembrances and in your heart with the haunting question every parent faces: Have I prepared them for the way they should go?

And I know my historical modus operandi here is to tell you yes, of course you have, because it’s really the striving, you see, that is the magic ingredient, and because you love your children you have striven, but the truth is I don’t know. I don’t know. People go wrong all the time, and sometimes you can trace that wrongness all the way back to their parents’ wrongness, and we’re all of us knee-capped in some ways by our own parents, and so it’s just plain logic to deduce that we’re knee-capping our own kids despite ourselves and some of them may never recover.

So I’ve been watching my own limping, because of course I never miss an opportunity to make it all about me. The point is, I’m realizing that when I don’t let it take over,6 it kind of angles me toward the path I should be on. You wounded people, you know what I mean.

And wouldn’t that be a miracle, and wouldn’t it be exactly like the God some of us know,7 for even the wounds to have a purpose? For even our mistakes which spill over into our children’s lives to be redeemed?