Of mice and men

The mice think I am a god. Not the God, but definitely a god. Their tithe is a fresh-hollowed hazelnut, rolled into the center of my floor every morning. 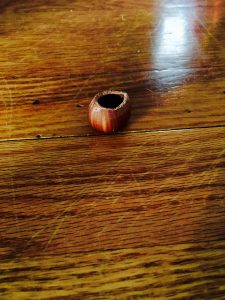 The nuts come, no doubt, from the two-pound bag they stole last month. I don’t know how long it took them, only that one morning the silver bowl we’d filled was undeniably emptied of everything but nutshell fragments. The mice probably didn’t even view it as stealing; the nuts were just waiting there, being ignored by my children, so the mice took them.

Soon after, we began to hear them in the walls. A furtive mousy gnawing that commenced whenever the house grew silent. Indignant, I put my face to the walls and shouted, I pounded them until the pictures rattled. In this I was more like King Lear than Jehovah, but I suppose to a small vertebrate protected from my fists by only a half-inch of drywall, it sounded pretty godlike in its fury.

And so the offerings began. Every morning an emptied hazelnut, smooth and round and exceedingly painful in the center of the foot’s sole. I mean, it has to be an offering, right? Surely a creature so small and insignificant wouldn’t taunt a being so much more powerful and knowing and prone to wall-rattling.

I credit “Sinners in the Hands of an Angry God” for at least two years of my youthful atheism, but perhaps Jonathan Edwards’s meditation would make perfect sense to those mice, because it was with a great wrothful vengeance that I laid my traps.

“The glittering sword is whet, and held over them, and the pit hath opened its mouth under them.”

Because you see, I can maybe tolerate the theft, the daily nutshell underfoot, perhaps even furtive nibbles echoing faintly along my walls. But there’s a principle here, something about defending one’s castle, not to mention the rodential bubonic plague or whatever, and worse than this the eventual snakes that’ll come slithering in come springtime, if I allow a tribe of mice to stake this territory as their Promised Land.

“The old serpent is gaping for them; hell opens its mouth wide to receive them; and if God should permit it, they would be hastily swallowed up and lost.”

And while I’m capable of handling most quadrupeds with a specificity of force that minimizes overall household damage, the thing with a snake in the house is I’m just going to open fire, because I’d sooner replace buckshot-riddled flooring than touch a snake.

Yes, yes, I’m familiar with the verse about crushing the serpent’s head with one’s heel. But that was penned before the advent of the 12-gauge Mossberg.

So, out came the traps. After my first kill, the mice tributes ceased. Perhaps they grew angry, or lost their faith, or hardest of all—speaking from experience, having endured all three of these states myself—their belief remained, but with it a kind of despondent confusion. Why do you afflict me so, when I have offered unto Thee the firstfruits from among my hazelnuts?

And the thing that puzzles me still, is why they continued to get trapped in exactly the same location. Why did they keep trying to steal a dollop of almond butter on the trap’s catch, when they had between them a quantity of nuts equaling the weight of approximately 60 mice?

I mean, would a little platoon of men keep trying to steal food if they were sitting on six tons of it? Are we that greedy or desperate or insecure? Surely not, right? Not we morally advanced men.

And oddly enough, with each snap of that trap I got a little sadder. It’s not like the North Carolina winters are all that harsh. Take your stolen nuts and get out. Or just stop taking the bait.

Maybe some of them did exactly that. The trap has stopped springing, and the intra-wall nibbling has quieted. Maybe the survivors are enjoying their hazelnut bounty in a field somewhere, a little sadder, a little wiser. Then again, maybe not a one of them learned his lesson in time. Maybe my walls harbor a ghost town of nut-fragmented passageways.

I suppose it’s hard for a mouse to resist his nature. It feels that way as a man, too. Haven’t we all been that thieving creature with his neck stretched beneath the bar? But while Jonathan Edwards didn’t think we have a deeper instinct, I think maybe we do. A pre-thieving, pre-creeping nature. It’s just that we forget our true selves. We become less than ourselves, and then what good are our offerings? Then, I think, Edwards proves right: “The corruption of the heart of man is immoderate and boundless in its fury.”

Forgetting who we’re supposed to be, stretching out our necks and awaiting the fall as if it’s inevitable. But it isn’t. We’re more than animals, after all, even though we often forget it.

Then again, maybe I’m overthinking all this. It’s just some bait and a trap and some inconsequential creatures who are unable to resist taking what they don’t even need. What lesson for man lies here?