Redesigning my blog was not a rational decision. I mean, consider the facts.

Fact One: Nobody reads any more. The data are pretty conclusive. We’re all eye-glued to our apps, or gaming, or enjoying the golden age of television. Sometimes all three at once. Nobody wastes time on long sentences stacked like shelves in a musty library. Nobody reads. You are not reading this. I am not even writing it. We have all been assimilated into the Alliterate Borg.

Fact Two: Okay, well, some people read. But they don’t read blogs. It’s so ugly, this merger of web and log. It sounds like something Capt. Kirk would employ to apprise Starfleet of his latest alien sexual conquests. Nobody reads blogs. They read novels about emotionally vulnerable bloodsuckers, novels about tatted Scandinavian web-hacking alt-girls, novels about teenage love in the dystopian ruins, novels exploring the ins and outs of leather thongs and nipple clamps. They read neuro-riff doorstoppers, page-turners about grizzled black-ops specialists, dollar-a-bag historical romances where everyone retains perfect teeth despite the absence of modern dentistry.

People read plenty, sure, but nobody reads long word-strings from an unsanctioned source.

Fact Three: People want consistency. Titillation within familiar bounds. Not a riff on presidential candidates one week and a missive on mice invasions the next and ideas on preparing children for the post-university era the week after that. Specialization is critical as choices proliferate. If you focus your blog on 50-word pet-care tips for recent amputees, you’ll get a devoted (and shockingly large) following of amputee animal-lovers. Offer recipes arranged for the dyslexic, and you’ll own the dyslexic home-chefery space.

But this hot mess? Please. Nobody has time for longform Precious Thoughts.

Fact Four: People want controversy. Takedowns. Sick burns. Shouting heads counterposed millimeters apart on the digital screen. Now, that was maybe one thing this space had going for it. Sand in the Gears, baby. Shutting down the Machinery of Power with deft tosses of grit. Telling it like it is. Testifying. 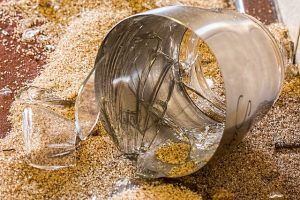 So what’s with this pretentious, self-serious appropriation of T.S. Eliot’s idea? Eliot (it should be noted by those of you inclined toward ad hominem attacks and guilt by association and other disputational tactics taught in our nation’s finest classrooms) the religious convert, possible homosexual, and associate of known anti-Semites. Fragments Against Ruin? Seriously?

It sounds like something the Smithsonian Channel would run in the red-eye slot. What ruin, you anti-progress Luddite sourpuss? And who the hell wants fragments? They sound sharp. Someone could put an eye out. Does OSHA even know about this?

So, the ruin and the fragments. A lot of experts tell us we live in the best of times, and that these times can only get better. This truth seems incontrovertible. Wealth is increasing, and so are longevity and nutrition and access to comforts. To be sure, some regions of the world are riven by violence, and mired in poverty. Even here in the U.S. we’ve seen a decade-long stagnation in household income. But viewed from the starting point of history’s long march, the human race is doing pretty darn well. All the trend lines on all the important charts are bounding up and to the right.

I get it, I do. And I’m thankful to live in an age of antibiotics and abundant food and air conditioning and all that. So where do I get off carping about ruin? What bloody ruin?

The thing is, I believe in something called the human heart. I believe this heart is more than muscle and valves. We have made the heart’s machinery longer-lasting, but my God, how we have abused the spirit within. The heart that is the vessel of the human spirit is not doing so well here in the Year of our Lord 2017, I think.

And count the cost, friends. Rising suicide rates, escalating mental illness, a catastrophic epidemic of drug addiction. Well over half a million people released from prisons every year into denuded communities with few job prospects. One in five young men effectively isolated—unemployed, not in school, not married. Their prime pursuits, by their own self-reporting: sleeping and video games.

Consider the price our children bear. Suicide is the second leading cause of death for American teens. Use of anti-psychotic and other psychotropic drugs on children is rapidly rising. A growing percentage are diagnosed with behavioral and psychological ailments even as we shower them with prosperity.

What ruin? Brothers, sisters, look around you. Witness the ruination of the human heart.

So what use are fragments in the midst of this silent devastation? Fragments of what?

Well, there’s certainly Eliot’s intimation, which is that from the smoldering battlefield we might retrieve pieces of truth, goodness, beauty. They can perhaps serve as a bulwark, even the genesis of a second chance.

But there’s also Dietrich Bonhoeffer’s lesser-known thought about a life’s fragments. It came to him in his last days, awaiting execution by the Nazis, wondering if his life would be spilled out in vain:

“It all depends on whether or not the fragment of our life reveals the plan and material of the whole. There are fragments which are only good to be thrown away, and others which are important for centuries to come because their fulfillment can only be a divine work. They are fragments of necessity. If our life, however remotely, reflects such a fragment . . . we shall not have to bewail our fragmentary life, but, on the contrary, rejoice in it.”

I spent a lot of years bewailing my own life’s fragments. And a good many of them do belong on the rubbish heap. But every life can have some fragments worth preserving. Even mine, even yours. So in the end, maybe that’s all this irrational exercise is for, to set them down in a place and consider them, and perhaps leave them here for my children, for whatever use they may find in them. For who can foresee the mosaic into which his life’s best fragments are pressed.

All any of us can do, I suppose, is be happily broken.