Maybe We’re Not All Bad

This is a post for men. This is not a post for women. If you are a woman, I respectfully request that you stop reading immediately. I’m fixing to explain a couple of things, and I certainly don’t want to fall into the sin of mansplaining. So skedaddle, ladies.

That includes you in the back. Sorry ma’am. Dudes only.

Okay guys, here’s the thing. I’ve been thinking about this Deirdre Coyle essay, in which she condescends to read one of David Foster Wallace’s lesser works, after years of avoiding him because every man who recommends him to her is, well, an asshole. As I noted in my last post, she commences her essay with a nifty ad hominem non sequitur, noting that one of her sexual partners forced cocaine into her during the act. Get it? This is the kind of guy who likes Wallace.

Coyle’s essay is unabashedly ill-informed and small-minded and mean, but it’s getting a lot of appreciative remarks from women who claim similar experiences (not the drug assaults, but haranguing pro-DFW exhortations from dirtball patriarchy bros).

First, let’s be clear. Guys who are mean are mean guys. We do not like mean guys, and we don’t want to be mean guys. And the guy who forced cocaine into Coyle should be in jail. Hopefully she called the police, so that no other young woman receives a similar victimization at his hands, or worse.

But we can affirm Coyle’s (and her readers’) experiences without embracing bad logic, right? I mean, that’s allowed, isn’t it?

What I mean is that I know decent men (and women!) who believe Wallace was an insightful, compassionate, brilliant writer. He’s not everyone’s cup of tea, to be sure, but it’s hard to understand the notion that he’s more likely to attract misogynists than Philip Roth, say, or Charles Bukowski.

Think about it. Deirdre Coyle lives in New York City. Her affirmers live in that city and in similar urban intellectual bastions—places like Berkeley, Middlebury, and Seattle. My apologies to the many good people living in intellectual communities, but let’s be honest. You’re carrying more assholes per capita than Wichita, Kansas.

Here’s a Venn diagram to illustrate my point.1 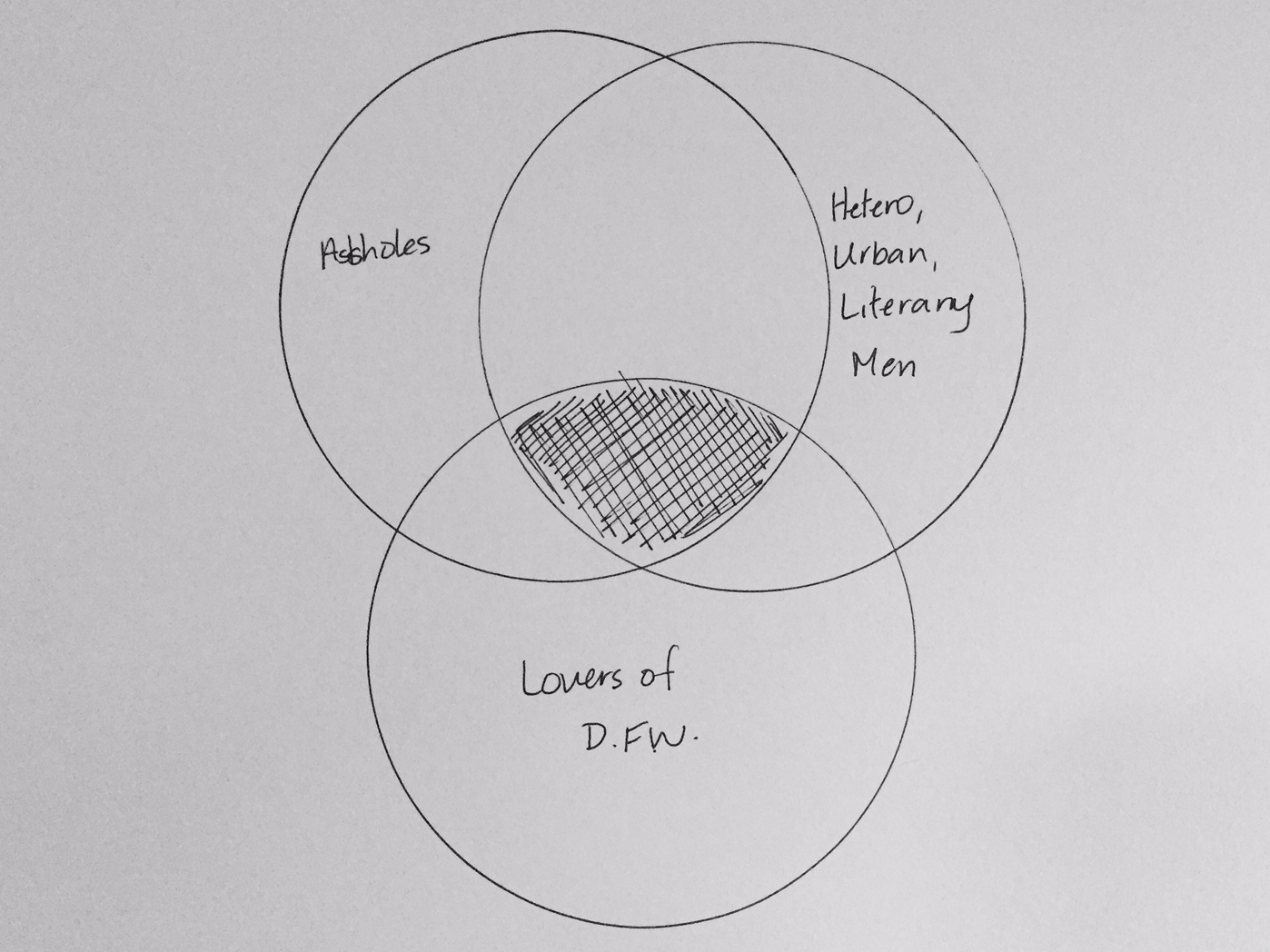 Maybe that hatch-marked field of Wallace-admiring assholes seems so prevalent, in other words, not because most Wallace-admirers suck, but because you’re mingling in the wrong part of the circle.

Of course I may have my proportions off. Maybe only half the men eligible to date intelligent, literary New York City women are assholes. Maybe 99 percent of them are. Maybe 90 percent of David Foster Wallace lovers are heterosexual, literary males living in big cities. Heck, maybe 100 percent of us are indeed assholes.2

It’s a conjecture, like I said, but so is the conclusion, drawn from the limited experiences available to someone living in a precious, urban, liberal literary bubble, that the jackwagons infesting big-city wine bars and poetry readings are representative of most men.

Now guys, whether you were already thinking the same thing, or you have just had your world Venn-rocked, I ask you to keep this to yourselves. I mean, the only thing worse than a suspected egotistical misogynist is a man who insists that he is not an egotistical misogynist. We doth protest too much and all that.

And while you’re keeping mum, maybe lay off the book recommendations. I mean, read the comments below Coyle’s essay. We are not helping ourselves. And this is basic Courtship and Courtesy 101. Give some genuine interest to her interests before you try to interest her in your interests. Or to put it more succinctly: Be a gentleman.

Tweets by @tonywoodlief
PrevPreviousA more perfect union
NextSince it’s commencement season, I’ve put together a draft address in case I get a last-minute callNext
On Key