Since it’s commencement season, I’ve put together a draft address in case I get a last-minute call

I’d like to thank Debtwell University for this opportunity to address your student body. Furthermore, I want to express my deepest hope that your original speaker overcomes [FOOD POISONING/ IRS DIFFICULTIES/ SUBPOENA/ ETC] without undue complications.

[PAUSE. MAKE EYE CONTACT. SQUINT AS IF DRAWING ON A WELL OF DEEP WISDOM, BUT NOT SO HARD THAT YOU APPEAR TO HAVE GASTRIC PAIN.]

I say this not because you have wasted four, or five, or even six years of your undistinguished lives—assuming you are not unlike your peers at other universities, and have squatted like slick rocks in the eternal stream of knowledge, impervious to all that hurtles toward you, much like an algaed slab is indifferent to driftwood that pummels it with no more effect than Don Quixote’s lance, which I realize is an allusion utterly lost on nearly every one of you. 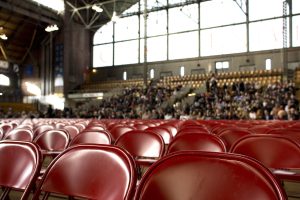 I offer no condolence on that front because your lack of humanities immersion, and logic capacity, and mathematical competence will likely have little consequence in your lifetimes. I mean, let’s face it: Many people do well enough without acquiring the slightest hint of any of these, as half an hour on the news site of your choice will substantiate. Strong societies, much like those stones in the aforementioned stream, take centuries to erode, meaning your mewling, aliterate, electronics-addled progeny will be the ones to pay the final tab. Whew! Close one!

What grieves me, therefore, is not the waste of your relatively valueless time, but the mass transfer of wealth from the pockets of your parents to the coffers of institutional charlatans, hustlers, and swindlers who have infested our Halls of Great Learning like moneychangers in the Temple.

Unless, of course, your parents were too clever to take the bait, or are themselves shackled to their own anchors of college debt, in which case you signed various pieces of paper which have bound you like Sauron’s ring, not for power or riches, but rather the privilege of being in the vicinity of Educational Events, some of which may or may not have penetrated the alcohol-infused state of sleep deprivation that passes for life in a community of young people so heedless of the future that they’re willing to spend $100,000 for a product inferior to what two hours of serious daily concentration could have availed them when combined with a library card and a Great Courses subscription.

My point is that you’re now at least four years behind your more ambitious peers. I’m talking about people like that Zuckerberg kid, the one who invented Facebook and is now hanging out with electorally-critical demographic groups and not running for president. [NOTE: IF IT TURNS OUT Z-BERG WENT TO COLLEGE, REFERENCE SOME OTHER BILLIONERD]

Or take my Uncle Larry. He grew up back when colleges still had admissions standards, so he went into plumbing. Now he has eight people working for him. He probably nets $100K per year. And it’s work that matters, because a society can only survive so long as it moves the shit faster than it manufactures it. I think Gibbon wrote that.

The historian, not the monkey. Not that either possibility popped into your heads.

And since we’re talking fecal supply and demand, please pause for a moment to reflect on the reality that you are slouching at the feculent epicenter of the Western world, the modern American university. [HOLD FOR APPLAUSE]

Case in point: these pieces of paper you’re about to be handed. They signify education. Accomplishment. After several years of effort, you have proven that you are marginally eligible for entry-level training in a position that pays no better than what your peers who had the good sense to go to vocational school started earning two years ago, while you were still learning to roll your eyes at convictions that helped your great-grandparents endure ordeals that would turn you into puddles of quivering poo. 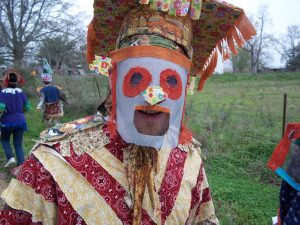 I can tell by the Dean’s hand signals that I must be nearing the end of my allotted time. In closing, I’ll note that I am not a priest [HOLD FOR APPLAUSE]. I would like nonetheless to offer you both absolution and a benediction.

The absolution is straightforward: It’s not your fault. We made this mess when we forgot the aim of a university education, which was never merely about making you employable. It was about making you accountable—to the truth and this world and your place in it. That probably sounds like gobbledygook, but maybe, for a handful of you, there is a sound in it that is something like truth. No matter how hard they may have tried here, they haven’t yet gouged the ability to hear that sound from your ears and hearts.

And thus the benediction: Go now into the world with your hearts and ears tuned for truth, and you will find it—or rather it will find you, and you will know you have been found. And then, my young friends, no matter your handicap—old wounds or poor breeding or even a modern liberal arts education—you will find your place, because long before we worried about careers we spoke of vocation, which roughly means, in a language taught only in fusty old places by fusty old farts, “calling.”

As in the place to which you are beckoned, i.e., the place crafted for you and for which you have been crafted, by a call that is for you alone to answer, despite what anyone else thinks your purpose should be, despite even the ruminations of a speaker who has clearly—I can tell by the approaching security escort—overspoken his allotted time.